Opening of The Bank Gallery Space in Carnamah


We launched The Bank Gallery Space in Carnamah on Sunday 30 April 2017 as part of the Australian Heritage Festival. The opening was patronised by hundreds of people from across the North Midlands in addition to visitors from Geraldton and Perth. Duncan Ord, the Director-General of the Department of Culture and the Arts (DCA), officially opened the building. 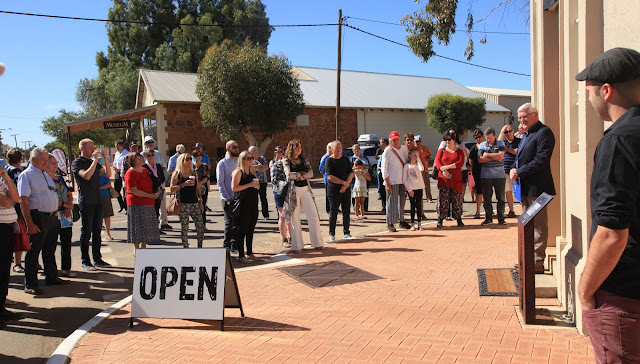 "It's an absolute delight to come up to Carnamah this morning for this opening. I get lots of invites but occasionally one particularly intrigues me.

What inspired me was the story about a bank that had closed, as is the case with many banks and other buildings in small country towns, and that it had been not only restored as a piece of heritage infrastructure but was being reopened giving new life to the community through the arts. That resonated with me enormously.

I would like to pay tribute to the North Midlands Project for their vision to bring life to this building. The restoration here is really magnificent. It is so faithful to the building.

I was really impressed driving into Carnamah [seeing] the photographs of the past in windows of buildings, which gives a real sense of the long enduring history of this community and its people. For many years no one could have imagined the Rural & Industries Bank wouldn't be here. Such is change in our society that the things that we would think are the most stable in our community, like banks, move on. Yet one of the enduring elements is of course our creativity and the role the arts play in society...


The Bank was constructed in 1930 as a branch and residence for the Bank of Australasia but was later used for many years by the Rural & Industries Bank (now known as Bankwest). Over the past 26 months the building was renovated and restored to its original configuration. The octagonal bank chamber, strong room and manager’s office constitute the new gallery space while other rooms include an office, meeting room and accommodation for artists.


For the opening the bank chamber contained an exhibition about the history of the building while the now blackened strong room (vault) contained images of the building's renovation. The old manager's office, which has been named The Geoff Ryder Room after the bank's first manager, displayed artworks created by students from the Carnamah, Coorow, Perenjori and Three Springs schools. We invite you to check out the four artworks and vote for your favourite. The winning artwork will receive $500 for their school’s art budget.

View and vote on the school artworks at:
www.northmidlands.org.au/vote


During the day artist-in-residence Di Taylor live painted a portrait of our local bushranger Frank Thomas. Over the coming months Di will be running community and school workshops throughout the North Midlands in addition to creating a series of artworks around stories of the bushranger.

Acoustic singer-songwriter Ashlea Reale helped create a great vibe outside with her unique songs about Western Australian history - including Hold on to Your Horse, which she’d written about bushranger Frank Thomas. The day was further enriched by free kids art activities on the veranda of The Bank and the Carnamah Historical Society & Museum, Bush Basket, Carnamah Hotel and the Macpherson Homestead all being open for the occasion.


In the afternoon we helped facilitate the first-ever TeachMeet to be held in the North Midlands and the night before The Bank played host to the first-ever regional #DrinkingAboutCulture in Western Australia.

Our thanks to everyone.

The Bank and its first exhibition will be open during the North Midlands Agricultural Society's Monster Stall, from 9am to midday on Saturday 20 May 2017.
Newer Post